We had a nice rainstorm last night, so “dry season” is only a relative term. Thus, when we went on our morning walk, it was still humid and felt like walking in pea soup. As the day wore on it was actually cooler and drier than yesterday.

Class started a bit later than yesterday, with the same number as yesterday, just a different arrangement. We covered Ruth, Orpah and Hannah, and the students again had some very good insights. Just before lunch, I lost my most talkative student after her son came into the room whimpering. It turned out that he had a rather serious cut that required stitches. It was beyond the capability of the local clinic to handle, so she took him to the hospital, and hopefully both will return tomorrow.

The ladies requested NOT to combine with the men in the afternoon, and since both interpreters were available, we stayed separate. Since there were very few ladies left, one of which was absent yesterday, we just did a review of the women we discussed yesterday. Before lunch I tried an experiment and had them read through Hannah’s prayer of praise in 1 Samuel 2 to see if they could do a short inductive study. It went reasonably well, but they are not overly talkative.

Pete and Siama went to a copy shop yesterday to make booklets of the week’s materials in the Myanmar script. However, when the completed copies were reviewed, it turned out that the first year’s materials were copied instead! Ahhh, to be able to read Burmese. So, the correct materials were found, and we dropped them off at a different copy shop on our way to the hotel. This was a small open-air storefront. As I peeked inside, I could see the family’s living room…with a well-used copier right in the middle…a new standard in interior decorating!

Here are pictures from class on Wednesday. Marta and Zoa are teaching in this building that is being constructed on the property. It will become a computer café and learning center in the future. This will allow Siama to reach out to the young people in the area. He does have vision on how to reach people in his neighborhood.

Bruce and Siama are teaching away with the men. It is a lot of material but the men are diligently listening and asking insightful questions.

This is Joseph Stephen. He was raised in a Christian home and is a missionary to his people. Currently he is working as Siama’s assistant at the home. He renamed himself with the American name Joseph Stephen at about the age of 13 because of the character of these men in the bible. A great testimony! 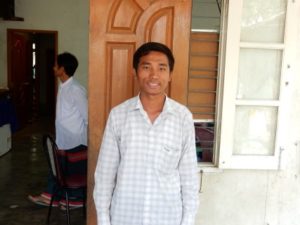 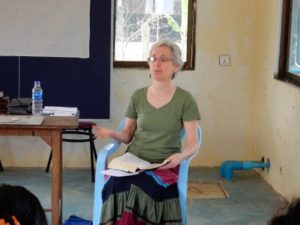 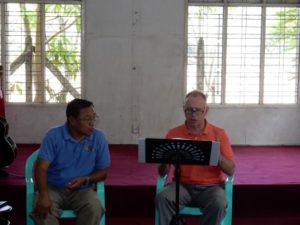 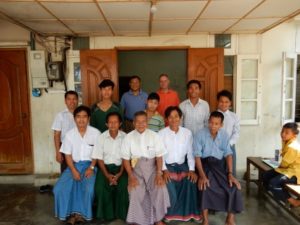 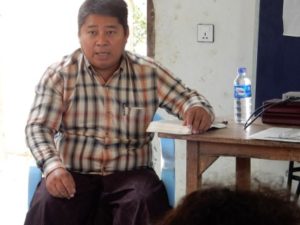