Our last day here in the Togo classroom was incredible. Despite missing 25 to 35 men to other meetings in the city, we still had 45 graduates receive their certificates of completion today.

You know, sometimes the thought crosses your mind as you pour yourself out day after day in a class like this, and you wonder if they are really getting it. I do the same thing in the American classrooms from time to time, but today I was tired from a lack of sleep and the constant interruption of translation time. When it came time to end the class and prepare for the graduation service, I was still wondering the same thing when my host Pastor Sika began to bring up a few preachers to tell me what they thought of the class. I was so glad he decided to do that.

One after another, it was amazing to listen to Donald translate their heartfelt appreciation for what they had received. Whatever doubt had crept into my heart was completely gone.

They do get it! And, they get more than you think they do. They know what it costs for GBTF to come and host the classroom for them. They understand the financial cost, the human cost, and the efforts we make.

Finally today, one of the most experienced pastors among our graduates came up to Sika while were talking after the lunch, and asked him to translate for him so he could give me a message. For about five minutes, between his message and the translation, he told how much he has benefited from the training and that he wanted me to know how valuable it is to him personally and to his church. Then out of nowhere, he took my hand and Sika’s hand and began to pray for Grace’s upcoming surgery and that God would be in perfect control from beginning to end. Who knew?

I have to say with tears as I write this that I don’t have any more doubt about what they are getting. I really believe that God has brought me to the hidden gems of his people all over this globe. These poor and little known men of God we train are the salt of this sin-cursed earth. As long as I can, I will endeavor to take this training to them so they can multiply the gospel, build churches, and reach their own nations for Christ until He comes! 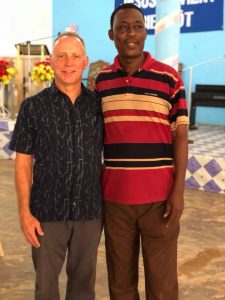