We love to share the human interest stories from the ministry of Global Baptist Training Foundation. This is our favorite.
In 2013, Grace met a young man from Myanmar who owns the sushi booth in our local Publix.   Her Vietnamese nail technician actually facilitated the introduction knowing we had just returned from classes in Myanmar.   Myanmar (formerly Burma) is the first country where GBTF began training classes in 2012. Ann and Adoniram Judson have long been our heroes, so working in this nation is a very special privilege.
Sing quickly became part of our family!  The first night he was in our home, we asked him about his salvation. He professed to be a Christian, but knowing that in this 90% Buddhist nation this means you’re not Buddhist, we dug deeper.  Sing told us that his parents are born again believers who are pillars of a Baptist church in a small, remote village in Myanmar (Burma).    He said his parents had been praying for believers to come into his life in America.
Sing had left his country at the age of 16 and applied for refugee status in the US. He is an incredibly charismatic, hard working young man who has worked his way up to owning this sushi franchise.
Sing was in a car crash and was severely injured.  As a result of this life and death experience, Sing became a believer in Jesus Christ.  We watched the change before our eyes.
Bruce told Sing that we had been invited to open a new GBTF class in the north of Myanmar. When Sing asked the name of the village, Bruce said, “Kalaymyo.”   Sing’s face froze as he explained that this was his village where his entire family lives. He had not been able to return for 8 years at that point.
Bruce did go to Kalaymyo, met Sing’s family, delivered gifts, and even had dinner in their home.  They were so thankful for the way God had woven our stories together.  Sing’s dad looked across the table and said, “You his father now!”  We are humbled and thankful for the opportunity to be Sing’s American family.
We watched Sing sworn in as an American citizen.  He got a passport and returned to visit his family and homeland after ten years’ absence. While there, he married Anna, but had to return without her because she didn’t have paperwork.  We worked hard tier Anna’s paperwork as well as citizenship papers for baby Grace, who was born 9 1/2 months later!
They are now in the US together. In February, Grace was with Sing and Anna at the hospital all day as they welcomed baby Isaac to the family!
Last week, Sing translated for Bruce as he preached in their local Burmese church plant.  In addition, Sing has now contributed to GBTF to help with the training of the Chin pastors in his home country. This is ministry full circle! 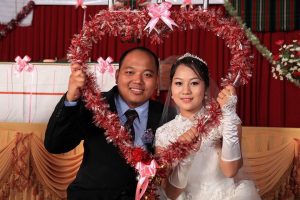 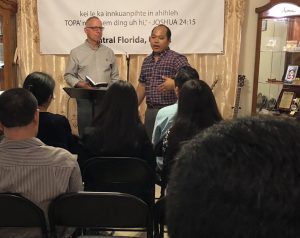