oday marks the first day of our third teaching class here in Kigali, Rwanda.  Mondays are always the hardest, and today was no exception.  We started in Theology 101 at about 9:15 with a study about the Bible itself.  I usually cover the basics including the foundational facts of what revelation is, how it came in the OT, and how the NT completed God’s self-disclosure of Himself to humanity.  I always stress the fact that God’s revelation is complete, final, inerrant, and authoritative in every area of life.  I don’t think I took a breath until about 11:00 when the forty or so students asked me for a break.  I felt pretty proud of myself for having initiated the first signs of tiredness upon my students instead of the other way around.  When they got back from their short break outside the building, they began with a series of questions about the previous lecture.

Before I knew it, we had a whole series of questions about the charismatic movement, speaking in tongues, and the other sign gifts of the apostolic age.  About the time I was taking the second question on the subject, my host stepped in to tell the students that they would have to let me continue my lecture, and that I would answer all of those questions after lunch with a one hour lecture on the temporary sign gifts mentioned in I Cor 12-14.  Then we broke for lunch at 12:30.  At 1:30 I returned from lunch to a full lecture room of students, some of which were very confused and uninformed about the subject.  I began my lecture within minutes of arriving and spoke to them about this subject for two solid hours when I was asked to stop for a break.  I was just fifteen minutes from being able to finish but we took a break anyway.

When they returned, I spoke for another hour when I then took seven questions about the subject.  I was expecting anytime for some of the misinformed Baptist pastors to begin arguing and creating trouble when I realized that I had just finished answering the last question.  When I was finished, I almost fell over backwards at the response.  All forty to forty-five Rwandan pastors stood to their feet and clapped.  This is their way of saying, ”Thank-you.”  I almost broke down in front of them but held my composure and simply thanked God under my breath that such a volatile subject had been so well received.

It is hard for many of us to understand how different it is here for these servants of God.  They have never had the opportunity to be trained in a Bible College or Seminary.   For many of them, two to three years of mentoring by older experienced pastors was the only preparation they could get.  Then they were put into the ministry because they felt the call of God upon their lives.  Fortunately, their hearts are trainable, and their spirits are so willing to learn.  I thank God for today.  It has shown me that what God has called us to do is such a privilege and that need is great and widespread!  Thank-you for giving of your resources and praying for GBTF! 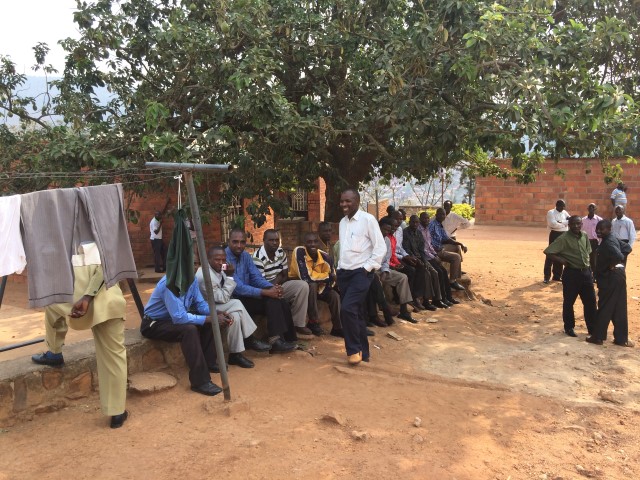