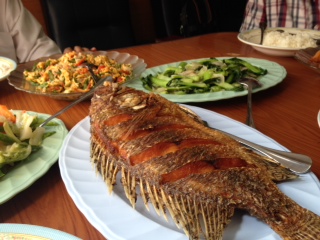 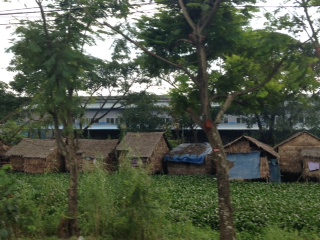 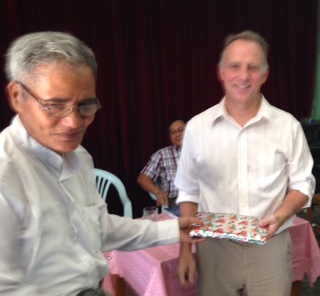 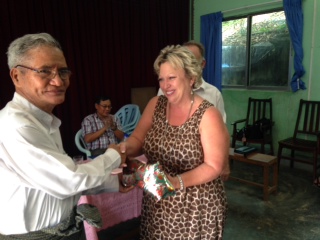 Well, today was our last full ministry day here in Yangon, and it was probably the busiest and the most profitable.  Having been invited to speak and lecture at Yangon Bible College, we headed across this sprawling city about 8:30 and didn’t arrive at the location until 9:30.  It was in a completely different part of the city than we had ever been before.  This part of the city is actually two parts.  It is in one part the poorest and most primitive part of the area and also has a huge bridge and road construction project going on in it.  We drove along one road that was just filled with the normal shanty type businesses for miles and also noticed on the other side of the road miles of squatter’s shanties.  These make-shift houses were primarily grass huts with bamboo framing side by side stretching for a couple of miles along the main road we were on.

When we arrived, the compound was gated in an extremely poor and primitive looking area that smelled like nothing I had smelled since I had been in Yangon.  It was in the middle of a number of shops which engulfed the compound and a number of open sewers.  It nearly took my breath away for a moment until I was able to adjust.  The buildings were all fairly small and interconnected.  We walked through what seemed like a maze until we were finally led into the presence of the pastor of Ebenezer Myanmar Biblical Baptist Church and president of Yangon Bible College, Dr. Thawng Za Mung.  He is a small man, in his seventies, who has a ready smile and a talkative nature.  He warmly greeted us and in a few minutes Grace and I were ushered off to our respective chapel rooms to speak to both the men and the women.

Grace had 52 women in her class, the largest she has had since we have been here.  I had about 25 young Bible students and men in my chapel class.  I lectured for about two and half hours on I Cor. 12-14.  Normally this lecture would take only an hour and a half.  The young men in the college, along with the older adult men appeared to enjoy and appreciate the teaching.  So much of the dynamic of a class depends on the ability and animation of your translator.  If you have good chemistry, you usually have a reasonably good outcome to a lecture or sermon.  If you don’t well, you just pray it is profitable anyway.

After the lecture time were taken to the small eating room where we were served rice, 2 whole baked fish, cooked vegetables, traditional soup, an egg dish with bananas for dessert.  The fish was the best fish we had eaten on this trip.  Even Grace ate a helping or two of it.  After dessert and some conversation about returning for a week of teaching next year, we were ushered to the chapel room where it was set up for the entire school chapel .  I deliberately kept the afternoon message short, and it was very well received.  I think the temperature in that room was over a hundred.  By the time I got finished I was completely drenched.   They then presented us with some gifts and after pictures we were brought back to the hotel.

We now have a wonderful problem to figure out for the foundation’s future in Myanmar.   The question is: how many trips will it now require to manage the two additional teaching sites we have acquired in the last 24 hours?  This is a good problem to have.  We think that at two separate trips of two weeks per visit, we will be able to do all of what is now necessary.  God is opening this country right before our eyes.  The future here looks very bright for continual training of pastors and church leaders.  Pray that God will give us committed partners this next year as we continue to raise the financial ability of the foundation in 2014.

Praise God for His goodness and grace,