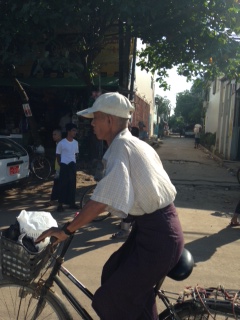 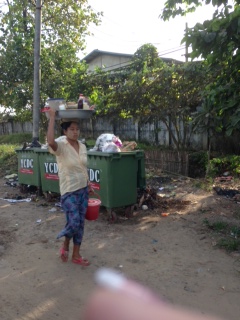 1. They have no health insurance.  If you get sick, you either pay cash or get no treatment. Dying?  Too bad.  The year old daughter of one of the women in my class had an accident on Wednesday evening.  She was jumping up and down from a squat position, and her eight year old brother thought it would be funny to put a pointy stick under her from behind.  It worked.  The stick went up inside her, and she had to have vaginal surgery.  The hospital wouldn’t see her without cash, so Pastor Siama got some money together and paid for her surgery.)

2. They have no car insurance.  No one follows any type of rule for driving.  It can be quite frightening.  Most of the vehicles are very old.  You have huge buses packed and overflowing bouncing from the lack of shocks, bicycle taxis, motorcycles, taxis, trucks with open motors on the front, and everything in between.  They all dart in and out of each other using mainly their horns as weapons.  If there happens to be a crash, and we are amazed that there are not more, the two parties must work it out.  If you call the police, you begin a long, painful, and expensive process that involves costly bribes.

3. The steering wheels are on the passenger side (by American standards), but they still drive on the same side of the street as Americans.  Very strange.

4. The men and women both wear long wrap around skirts. For the men, it is called a longhi, and the women’s version has another name.   The attached picture is of man riding a bike in his longhi.

5.  The women still carry large loads around on their heads.   The weight of what they carry on their heads is astounding!!  Yes, a pix is attached!!

6. Credit cards and ATM cards are still unknown in this society.  CASH only – for everything large and small, even an airline ticket!  A tax collector showed up at the compound yesterday while we were having lunch.  Pastor Siama had to dole out the required tax plus a little bribe.  P.S.  They love the new $ 100 bills we brought.

Hope this helps you with understanding this country!