About ten-o’clock this morning Pastor David picked me up at the hotel to preach at his church. The church finally filled up around 10:35, and we began. There were several songs and a short teaching message from one of his men (my student) which I would have loved to hear in English, but I had to simply sit and listen to it in one of the Chin dialects. He seemed to be a very good teacher, and I loved the clear way in which he enunciated every one of his words. He spoke about fifteen minutes and then sat down. He was followed by a young lady who sang a beautiful song in their tongue, which was in turn followed by the morning offering. The entire offering was then placed on the front table, and a blessing was asked over it by one of the elders. It was a very solemn element of the entire service to that point.

At about eleven-thirty I was introduced, and I began my message from Acts 26. This is Paul’s formal testimony before the court of King Agrippa. It serves as a great pattern for how to give a personal testimony. At the close of the service about ten to twelve individuals committed themselves to giving their testimony to at least one person whom God would bring to them in the coming year.
It will be great to return next year to see how they been used of God to witness among their family, friends, and co-workers. It has been a great week here in Kalemyo.

I noticed this week that my small hotel had other western people doing some kind of ministry or charity work here. Many of the cults are sending people into this country. The door continues to open in Myanmar to the influence of the west. Time will tell if the door remains open or the fledgling democracy begins to turn the other way. I kind of think that the new openness is here to stay, but strange things can happen in places like Myanmar.

Tomorrow I fly to Yangon for my last week with Siama, the son of Pastor David. Pray that Pete and Marta will have a great first day and that my plane will be able to fly out of Kalemyo. The fire smoke from the burning fields in the north have prohibited a lot of plane travel lately. I am praying that I can get out in the morning. The alternative is a twelve hour bus ride over washed out roads. 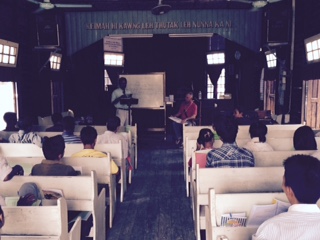