We have completed day 2 of the Togo classroom and I wanted to let you know how things are going. In short, very good, but let me give you a little longer version which I hope will encourage all our supporters.
Somehow this week, a few other American groups have decided to hold conferences in Lome for pastors. I didn’t know about this until I arrived, and my host and translator knew about them but could do little to change anything. As we were driving today on a few errands before dropping me at the hotel, I overheard an intense conversation occurring between our Host Pastor Sika, and my translator Donald. Finally when I couldn’t take not understanding any longer, I broke into the conversation and asked them what was going on.
They said they were comparing the training of these other groups with that of GBTF. I cringed in my seat, and then asked them what their verdict was. Almost in unison, they said, “There is no comparison, the training we are getting thru GBTF is better than anything we have seen in Togo.”
I cannot tell you how that made me feel. But I want you feel it, too! God has raised up a great GBTF team, and I am so proud to serve on this team with you. Let’s keep doing what God has called us to do for His glory. It’s obviously working!
Ready for hump-day tomorrow,
Bruce 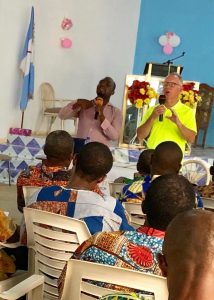 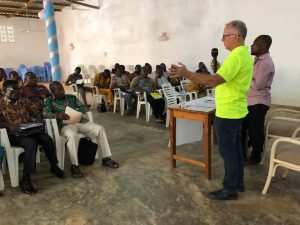