We are in the largest classroom ever in Liberia this week.  We began with 75 pastors, and we are now up to 81 on this, our second day of class.  The class is now closed for earning a certificate of completion, but that doesn’t mean we couldn’t have more by tomorrow.  This classroom is also  the most electric classroom environ to date.  It started yesterday upon the beginning of the class when I introduced a fellow African pastor from Rwanda who is now a trainer for GBTF in East Africa.  I didn’t know what to expect.

When Fidele took the floor he was warmly greeted, and for the next 30 minutes, he literally captivated the 75 Liberian pastors telling them about his home state of Rwanda.  However, when Fidele began to tell them about the genocide in 1994, you could have heard a pin drop.  Fidele was only 14 years old when it happened, and he told them how it happened and then some of the details.  It was an incredible scene.  Before he finished Fidele than told the men about the rebuilding of his country and how it now stands as one of the most developed and growing African states.  In fact, the president Paul Kagame is now the chair of the African Union of the entire continent!  Rwanda’s renewal is one example of what can happen when a man of integrity and determination assumes leadership.

The truly amazing point was when Fidele gave his testimony about his call to ministry, his pastoral experience, and his call into training pastors through Global Baptist Training Foundation.

The interaction between the Liberian pastors and Fidele was truly a sight to see.  I am thankful I was there to witness it and enjoy the interaction. By the time he was finished there was a delightful buzz within the room and evidence that all parties had inspired each other and had left indelible spiritual impressions.

I am so thanked to be on the cutting edge of missions on this continent!  God is moving through GBTF, and I know there is so much more He plans to do through willing servants.  My prayer is that we will be sensitive to what God is directing us to do and continue expanding our efforts as He enables us .  This is a work of faith, and I can assure you that I wouldn’t want it any other way.  Next week we open a new classroom in Buchanan, and then, in January, we will open our third classroom in the capital of Monrovia.  Pray for the Liberian pastors as they attempt to reach the God-sized goal of starting 500 new church plants by the end of 2021.  We have over 395 more to go.  I wouldn’t bet against them! 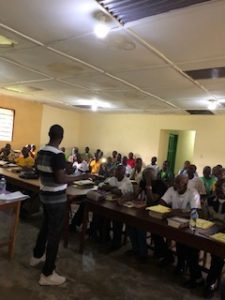